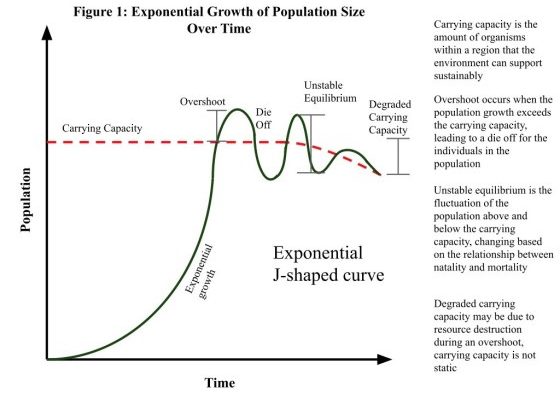 There seems to be an emerging consensus that the choices we make around food, and thus agriculture, are important. That the individual decisions we make about food have planetary consequence. These dietary beliefs are coalescing into words like conventional, organic, vegan, regenerative, locavore and paleo. Each of these represents a different view of our collective situation and suggests different choices if we wish how we eat to be of benefit to our world.

I’d like to begin with what I hope is an uncontroversial starting point, and then explore a little from there.

If humans want to continue to exist (in anything approximating our current population) we must provide for ourselves from within healthy ecosystems.

Okay, so what’s an ecosystem?

Okay, so how do I know if an ecosystem is healthy?

The amount of life that an ecosystem can support indefinitely is called its carrying capacity. The maximum carrying capacity is determined by the resources and constraints of the place the ecosystem occupies (eg. sunlight, water, temperature, minerals, shelter, pollution, wind etc).

Life within ecosystems is organised in complex food webs. As ecosystems heal not only will the quantity of life increase, but new species will arrive and new interactions between species will occur. As the complexity increases so does the quantity and availability of food. In this way the amount of life the ecosystem supports will spiral upwards until it eventually maxes out at the carrying capacity (where the underlying limits of the place it occupies are reached). This allows us to use complexity as an indicator of ecosystem health.

To assess ecosystem health you need to have some idea of its carrying capacity. Imagine an exposed, rocky hilltop compared to a sheltered, warm river valley. At full health, each might have a dramatically different carrying capacity and complexity. This can be confusing because a healthy desert ecosystem might be less complex than a sickly woodland.

Okay, so why are healthy ecosystems important?

As ecosystems degrade, the amount of life they can support decreases. If there are more humans than the ecosystems of the planet can support, then eventually humans will die back to a population that the ecosystems can support. Since human population is projected to continue growing (at least for a few more decades), it would be sensible for us to focus on increasing ecosystem health. We are especially vulnerable because many of our industrial practices create pollution which further damages the ecosystems we rely on.

The focus of this article is about food, but humans require more than food from ecosystems. In addition to our needs for fuel and fibre, healthy ecosystems also regulate temperature, create rain, reduce flooding, mitigate pollution, pollinate crops, etc. These are sometimes referred to as ecosystem services.

In a broader context, anthropogenic ecosystem degradation is not a new phenomenon. Humans have been damaging ecosystems for millennia. Perhaps the first major shock began about 50,000 years ago as we started hunting most of the world’s megafauna into extinction. Then about 10,000 years ago, our early attempts at agriculture began turning some of our planets most abundant ecosystems into deserts.

One of the unfortunate realities of long-term ecosystem degradation is that every generation sees their degraded experience as normal. It’s hard to comprehend what was lost before we were born, let alone what was lost before our grandparents were born. For most of us, the loss over the last 50,000 years is unimaginable.

Okay, so what does any of this have to do with farming and food?

At this point I hope that we can agree on two things:

Agriculture was developed on the floodplains of the world. The regular floods brought nutrient-rich sediment which makes floodplains some of the most fertile ecosystems on the planet. Most agricultural crops require ecosystems as fertile as the floodplains we originally cultivated them on. While carrying capacity and complexity can vary dramatically between ecosystems, when talking about agricultural ecosystems we can assume a degree of uniformity because the crops have similar requirements. By comparing the complexity of different agricultural production systems, we can get a sense of the ecological health they engender.

Below are some photos typical of conventional production. How complex are these ecosystems? How many species can you see?

Now let’s look at some photos of alternatives. How complex are these ecosystems? How many species can you see?

You can’t see the climate, pollution, soil type, microbes, insects or the details of plant species in either set of photos. However, even without those details, you can get some sense of their health and how close they might be to their potential.

When you buy food at a supermarket you are buying conventionally produced food. The amount of care and skill with which conventionally (and organically) food is produced varies tremendously from farm to farm.

While the amount of damage varies from farm to farm, the reality is that conventional production techniques damage ecosystems no matter how much care and skill is applied.

That all sounds terrible, what’s the alternative?

While there is a steady increase in numbers of acres under regenerative management, overall there are very few farms using these systems. In Western countries, adoption has been particularly slow. In part, because the increased complexity of these regenerative farms makes mechanical harvesting difficult (and the low cost of food and the high cost of labour means manual harvesting isn’t financially viable).

What we are currently lacking is the political and social will to regenerate ecosystems on a massive scale. This is something that everyone can help with. Find your local regenerative farmers and buy as much as you can from them. Talk to your friends, coworkers and family about the importance of ecosystem health. Talk to community leaders and local politicians. After all, history shows that only 3.5% of the population is required to catalyse massive shifts in public perception and policy.

The tide of humanity
washes
over
me

I mix my metaphors
and conjure memories
into bittersweet cocktails

Show On AirbnbLiving Ground: A place to rest and regenerate.